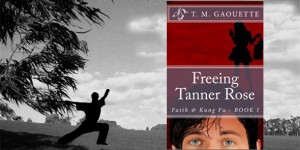 Get the Scoop on Our Blogger T.M.’s NEW Novel
and Enter to Win a Signed Copy!

PI Girls, have you ever wondered what it would be like to be famous? 14-year-old Tanner Rose, the title character in our blogger T.M. Gaouette’s latest novel, Freeing Tanner Rose, didn’t have to wonder…she’d made it big in Hollywood and was the toast of the young “It” crowd. But when her partying and addictions spiral out of control, Tanner suddenly finds herself forced to live in the countryside with only her mom’s college roommate and 16-year-old son, Gabriel, for company.

Right away, Tanner and Gabriel butt heads. To Tanner, Gabriel is just a boring Christian without a life, while Gabriel finds Tanner superficial and rude. Will his faith help her get her life back on track, or will Tanner’s wild lifestyle start to tempt Gabriel down the wrong path?

If you’re looking for a great book about temptation, friendship and God, you’ve got to check out Freeing Tanner Rose. It’s full of beautiful descriptions, intriguing characters and the reminder that loving God is a way of life. We asked T.M. for more details about her book and writing process…read on to learn more!

PI:  What was your inspiration behind Freeing Tanner Rose?

T.M: “Faith & Kung Fu” is not only the name of the book series, but also its motivations. Freeing Tanner Rose itself was inspired by 1 Corinthians 10:13, because so many people struggle with temptation. This story is directed toward teens and young adults. However, since the story of Tanner and Gabriel began in 2009, it’s evolved in so many ways. Certain parts of the story and the direction in which it has gone have been motivated by different circumstances that have arisen as the story’s progressed throughout the years.

PI: What do you hope readers take away from the story once they’ve finished?

T.M.: That we live in a world full of temptation. It comes in all shapes and sizes, and we can’t always avoid it, but if we look to God and keep our focus on Him, we can resist anything that comes our way.

PI:  Modesty is a big theme in Freeing Tanner Rose. Why did you think it an important one to focus on?

T.M.: Modesty is just one of the main elements of the overall theme, which is temptation. And it’s one that both Tanner and Gabriel struggle with, in their own personal ways. But modesty is not just reflected in the way a person dresses, it’s reflected in attitude and character and the way a person lives. And in all these aspects, it represents restraint and self-worth and self-confidence. When Gabriel tells Tanner that she’s the “epitome of all that is tempting to someone who lacks control,” immodesty is just one part of that. So, modesty has a deeper meaning throughout the book. Other elements of temptation within this novel include addiction and purity.

PI: What was the hardest part of writing Freeing Tanner Rose?

T.M.: Letting it go! I always have a hard time letting a story go.

PI: Do you think you’ll ever come back to Tanner Rose and Gabriel in a future book?

T.M.: Freeing Tanner Rose is the first of a four part series, so it’s likely that Tanner and Gabriel will be back.

Visit Project Inspired and find out how you can win a free signed copy! And don’t forget to “Like” my author page for quick book and PI news on Facebook! (“like” box in sidebar:) 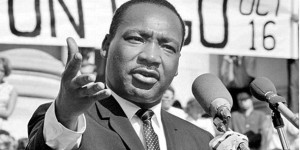 Ladies, Martin Luther King, Jr. was an amazing man and an awesome speaker. He recognized the meaning of civil rights and he knew how to inspire millions of people of all walks of life.

In remembrance of this great leader, and in celebration of Martin Luther King, Jr. day on Monday, I wanted to highlight some of my favorite quotes of his. I could be here quoting him all day (it was tough to narrow down my list–I know later I will remember yet another quote I love and kick myself for forgetting it!), so I chose 10 of his quotes on 10 different and very important themes. Enjoy!

Ladies, which of Martin Luther King, Jr.’s words have inspired you? Share them below; we so love to hear from you!

THE music pounded within the constraints of the dimmed room, pulsating through the bodies of every dancing person. It was a large, extravagant room, packed far beyond capacity and marred by the quality of entertainment. The crowd created a thick, stuffy heat in the space, along with a stench that was a culmination of cologne, perfume, and sweat. But to the guests attending, it was a paradise. It was a place of refuge for some, and a place to hide for others. And you had to be someone special to be invited.

Tanner threw her head back and laughed, spilling her cocktail and squealing. She was sitting on her friend Emma’s lap, experiencing the perfect level of euphoria, and she didn’t want the feeling to end. As she looked around the room, she was suddenly aware of the fact that her life would probably never get any better than this. The thought seemed ridiculous, since she was only fourteen. But the idea that she could feel even happier than she felt at that exact moment, seemed even more inconceivable. She let out a content breath and scrambled awkwardly to her feet.

“I want to dance!” She yelled her announcement over the music and turned to Emma. She reached out to her friend, who let out a short scream.

“Watch your smoke!” Tanner had forgotten that she was smoking.

“Oh, my bad,” she said and giggled. She dropped the cigarette butt into an unfinished beer bottle and attempted to pull her reluctant friend off the couch. A hand grabbed her arm and spun her around, and almost off balance. She was suddenly face to face with Jason Allen. His brown eyes sparkled.

“Tanner Rose, I’ve been looking for you.”

“I’ve been here,” she said, laughing and gesturing to her surroundings. He spun her again and the move caused her vision to swirl. She let out a screech and grabbed him for support. “Cut that out!”

“You look amazing,” he said, taking advantage of her backless dress and caressing her bare skin. “I was looking for a dance, but now I’m thinking we should take a little time alone.”

“Are you undressing me with your eyes, Mr. Allen?”

“Kind of,” he said and laughed, “but you haven’t made it too hard, if you know what I mean.”

“Whatever!” She laughed too.

“I want to dance!” she said sternly and grabbed his hand. She dragged him through the mob of people.

Tanner pushed her way in among the mass of bodies on the dance floor and closed her eyes. And then she lost herself. She lost herself in the music, the movement of the crowd, and the warm and fuzzy sensation that was consuming her. That was the last thing she remembered.

Hey friends! “Freeing Tanner Rose” is finally complete and on the market!

I’m in the process of sending copies out to reviewers. If you are an online book reviewer for a Christian blog, online bookstore, Christian teen website, etc, please contact me. Please note that I only have a limited amount of books set aside for reviewing.

I will be posting the first chapter soon. So stay tuned!

Following are some past posts on “Freeing Tanner Rose”:

Letting Go of a Novel After Years of Laughs and Tears! 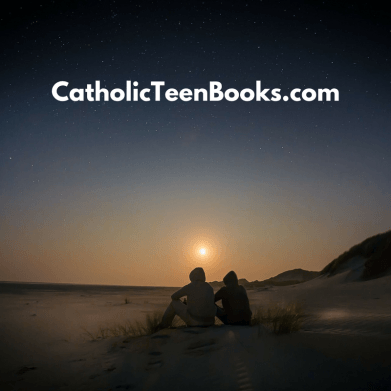