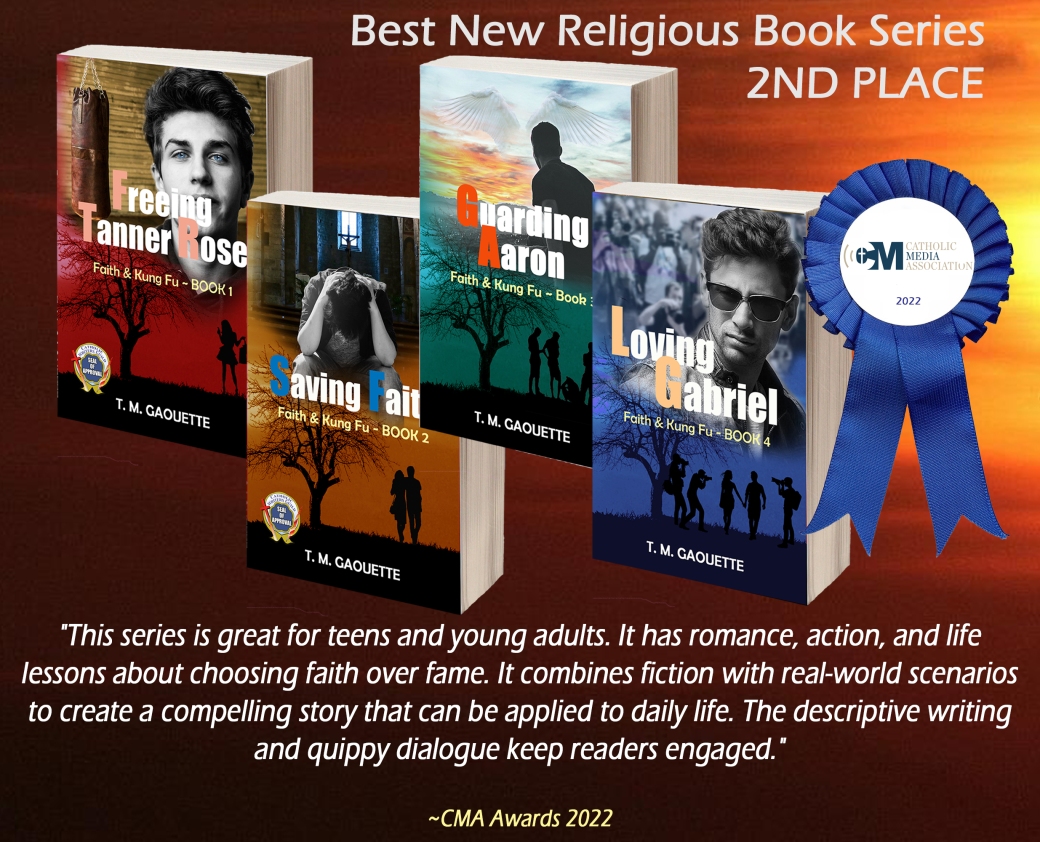 For Gabriel, Tanner Rose is just a superficial starlet, addicted to Hollywood. For Tanner, Gabriel is just a boring, kung fu-loving, Christian boy, who’s living a lackluster life in the middle of no-where. So, what happens when she’s forced to live in his world? It doesn’t take long before Tanner Rose craves a taste of her old life, even if it means upsetting a few people along the way. She thrives in the spotlight, after-all! Will Gabriel’s faith encourage Tanner to change her partying ways or will her wild undertakings and addicting vices tempt him to do things he’d never, ever considered before?

“There has no temptation taken you but such as is common to man: but God is faithful, who will not suffer you to be tempted above that you are able; but will with the temptation also make a way to escape, that you may be able to bear it.”  (1 Corinthians 10:13)

Freeing Tanner Rose is the first of four books in the Faith & Kung Fu series. “Saving Faith” is book 2.

“I have read several of T.M. Gaouette’s stories and her greatest strength as an author is her real-life and sometimes gritty portrayal of young characters who are caught up in the contemporary world and battle contemporary problems.

Teens will love this book but be warned: it contains drug taking, drinking alcohol to excess, teens behaving in immoral and amoral ways. There are references to sex. There are no graphic depictions of how young people take drugs and no graphic sexual depictions. There is one character who smokes marijuana openly. There is no swearing . . .

. . . The relationship between Gabriel and his mother is well crafted.  We learn that Gabriels’ father died.  Later, we learn that his father drank alcohol to excess.  Gabriel’s father wasn’t perfect. This fact provides another layer of meaning into why Gabriel and his mother, Miss Ruth, persevere with Tanner despite the heartache and challenges she throws up at them. I admired how T.M.Gaouette allowed our hero Gabriel to falter and weaken at one point in the story – this episode provided more depth and reality to his character . . .

. . . The book is entertaining and fast paced. Girls will love blue eyed Gabriel. They’ll giggle at Tanner Rose’s excesses and pretentions. They’ll be shocked at times, but ultimately God, prayer and Faith save the day.” (Visit catholicchildrensstories.com for more Freeing Tanner Rose: A Gritty and Fast Paced Catholic Story for Teens)

“I wish there had been books like this when I was a teen! I happened to grow up in a really, REALLY less-than-wholesome peer group situation, and I had no reason to believe there were any ‘good’ kids my age ANYWHERE. It seemed everyone around me was a Tanner Rose. Now, I’m not going to go into any gory details here, but it wasn’t until years and years later that I discovered there actually were some kids out there who didn’t smoke, drink, do drugs, etc. It would be so nice if every teen experiencing this feeling could read this book and realize that there really are kids out there like Gabriel and his friends.” (Visit MollyMcBrideandthePurpleHabit.com for more Faith and Kung Fu Series Packs Positive Punch)

“A refreshing novel, Freeing Tanner Rose: Faith and Kung Fu, Volume 1 by T.M. Gaouette gently introduces a world of faith and purity rare in young adult fiction. While at times it is difficult to believe the wholesome attitude of Gabriel, author T.M. Gaouette allows the character’s façade to slip in a real moment of weakness. The dialogue is realistic and comfortably predictable in this universal theme of rags to riches. Even though the presence of adults exists, the characters are not overwhelming, making this story non-threatening to the sensitivities of the defensive teen reader.” (Visit for more at Readers Favorite)

“Freeing Tanner Rose is the story of young actress Tanner Rose. Her fame is overwhelming, she’s been making dangerous decisions, and her life is spiraling out of control. She is sent to live in the country with her mother’s friend Miss Ruth and son Gabriel to get away from the Hollywood lifestyle. The stark contrast between Tanner’s world and Gabriel’s life was stunning and Tanner’s growth and struggles were believable. The story highlights the destruction that fame can cause at a young age as well as the dangers of drugs and alcohol – which is an important message for all teens. There were a few aspects of the story that were unexpected. I thought I knew where the story was headed but was pleasantly surprised to find out I was wrong. I especially loved the ending of this book. Throughout the story I kept wondering how it would conclude. I usually love a happy ending, all tied up in a pretty little bow, but wasn’t sure how that could be accomplished here and thought the author did a wonderful job. Great book with wonderful messages for teens. Well done!” (Leslea Wahl, Author of The Perfect Blindside)

“The characters are wonderfully written. The solid honest ethical life of Gabriel and his mother in contrast to Tanner and her Hollywood shenanigans is a stunning look at faith in the midst of modern life and culture. The story was compelling and an absolute page turner. I can highly recommend it. It is one of the best Christian Fiction stories I have read in years, and one of the best Catholic Fiction stories for young adults I have ever read. In many ways it reminds me of Regina Doman’s writings. Good solid writing crafted into an awesome story. Freeing Tanner Rose is to be the first of four books in the Faith & Kung Fu series. And I cannot wait to read the next installment. It was an excellent read.” (Visit Book Reviews and More for more of from this review by Steven McEvoy – also posted on Catholic Dads Online)